A widely exhibited artist known for large mixed-media prints that combine digital and traditional processes,  Carmon Colangelo’s work has been featured in more than 20 solo shows and dozens of group exhibitions in Argentina, Canada, England, Italy, Korea, Mexico, Puerto Rico, and across the United States. His work has been collected by many of the nation’s leading museums, including the National Museum of American Art in Washington, D.C., the Whitney Museum of American Art in New York, the Fogg Art Museum at Harvard University, and the Saint Louis Art Museum.

Colangelo is featured as the eighth residency artist in the series of the George Mason University School of Art’s Distinguished Visiting Artist for the Navigation Press Printmaking Program.  The Friends of Art at George Mason University have generously supported the residency series affording students the opportunity to work with artists of national reputation at Navigation Press. Through lectures, exhibits, critiques and workshops the students and invited community learn from contemporary masters.

A slide/lecture by Lulan Yu, Adult Programs Coordinator of The Virginia Museum of Fine Arts will discuss this major  exhibition now open at the VMFA in Richmond.

“Forbidden City: Imperial Treasures from the Palace Museum, Beijing will present nearly 200 works of art drawn from the collection of the Palace Museum. Featured works include paintings, sculptures, costumes, furniture, gold and silver, jade, lacquer, and other decorative arts. These artworks represent the imperial collection from the Ming (1368-1644) and Qing (1644-1911) dynasties with a focus on the mid-Qing dynasty. In addition, the exhibition features a number of works drawn from VMFA’s collection. Forbidden City addresses how Qing rulers incorporated their Manchu nomadic traditions, adopted cultural elements from ethnic groups, and endeavored to create a diverse government and maintain societal harmony” – Virginia Museum of Fine Art 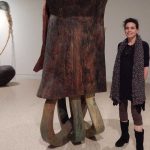