Kehinde Wiley: Impressions of an Artist by Karen Getty of the Virginia Museum of Fine Arts

MPA’s special lecture about Kehinde Wiley’s exhibition “A New Republic” took place on Tuesday, July 19th, and featured guest speaker Karen Getty of the Virginia Museum of Fine Arts (VMFA) in Richmond, Virginia. Getty is the Assistant to the Curator of African Art, and also works within the museums Education and Development Department. As an active participant in development, presentation, and education of Kehinde Wiley’s exhibition, she has in depth knowledge of the artist’s beginnings, influences and artistic processes.

VMFA’s Wiley exhibit consist of over 60 works, including paintings, sculptures, and stained glass. Pieces of “A New Republic” are separated into several series with various topics, including Women, Saints and Icons, World View and more.

MPA eagerly welcomed Getty to our galleries to discus one of the world’s most prolific and current artists. Getty took our MPA audience on a detailed “tour” of VMFA’s exhibit, noting Wiley’s more popular works, and explaining the historical and symbolic impression they have made on modern art. She began her lecture by discussing Wiley’s early life. She stressed the importance of his need to connect with his African heritage and Nigerian roots. He began submerging himself in the arts as a child, when his mother sent him to art school where his natural talent flourished. Growing up in the rough neighbourhoods of Los Angeles, Wiley’s mother made an effort to keep Kehinde out of trouble, and participate in productive, artistic endeavours.

Wiley’s works clearly exemplify the importance of the modern minority race male and female figures, but what makes his art particularly intriguing is his fresh approach to recreating the works of history’s greatest artists. Wiley is influenced by works from all over the world, and various periods of art, from French Neoclassical sculptor Jean-Antoine Houdon, to Italian Renaissance painter Titian. Getty went on to explain the symbolism and meaning that is infused in the towering 6-foot plus, larger than life works. The intricately painted decorative floral patterns boast African colour palates and world prints, while proudly posed figures gaze directly out at viewers. Wiley’s art is meant to represent the faces and bodies of our vast and unique world, and celebrate humanity in equal measure.

Celebrating and observing modern prolific art at MPA has never been more interesting and insightful, be sure to visit our website for oncoming events and art lectures! 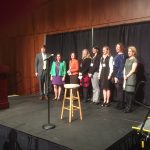